Our biggest honor is our large number of repeat goat buyers. Thank you for trusting us again and again to provide your new        4-legged family members!

We maintain a small herd of Myontonic Goats. Though the larger boned Myotonics are often raised as meat goats, most of ours are the smaller type that make great pets and show animals, especially for children. Our does average 21" - 24" tall and 60-100 lbs and our bucks are 23-25" tall and about 80-120 lbs.​  Our  herd is tested every other year and  tested Negative on 4/14/2021 for Johne's and CAE.

We specialize in several specific coat colors and patterns, but often produce other colors as well. We also strive to produce Blue or Marbled Blue eyes as often as possible.
Blue, Blue and White, and Tri-colored are our favorite coat colors and we produce many patterns but especially white banded Blue and Peacock patterned Blue, or tri-colored kids.
Here are a few examples showing marbled Blue eyes, White banded Blue and peacock patterened individuals: 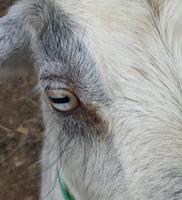 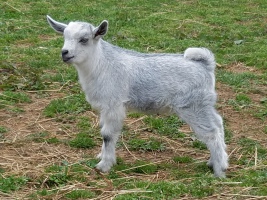 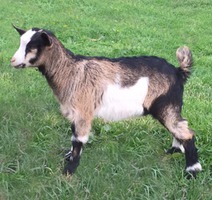 A tri-colored AND peacock patterned kid. 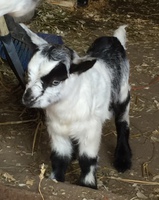 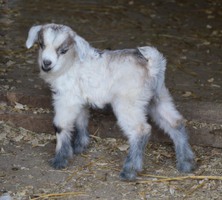 And a tri-colored, peacock patterened kid!

Why do Fainting Goats Faint?

Fainting is caused by a genetic condition call Myotonia congenita. The degree to which a goat exhibits myotonia is rated on a scale from 1-6, though the guidelines are general, they are as follows:

1.    Never observed to stiffen, but other type traits are consistent as is pedigree.

3.    Stiffens only occasionally, and rarely falls.

4.    Walks normally with no swivel. The rear limbs lock up readily, the forelimbs less so, and goats with this degree of stiffness rarely fall to the ground.

5.    Animal walks relatively normally, although somewhat stiff in rear and with a swivel at the hip. Readily stiffens when startled or stepping over a barrier.

6.    Animal always moves stiffly to some degree, and readily becomes “locked up” when startled or stepping over a low barrier.

Fainting is seen most often in younger animals because, as they age, they learn coping behaviors to help prevent falling over. In an adult that is startled, you will often see them start to lock up and then freeze in a saw horse type stance rather than falling onto their side. This is their way of "preventing" the fall they know is coming when they feel their muscles tightening. Does the locking of the muscles "hurt"? There is no way to know for certain, but humans afflicted with myotonia congenita report that is does hurt, like a severe muscle cramp that is uncontrolable. For this reason we try not to cause our goats to lock-up, but it still happens often for uncontrolable reasons like the Livestock Guardian Dogs taking off barking, or a feed can lid being dropped.