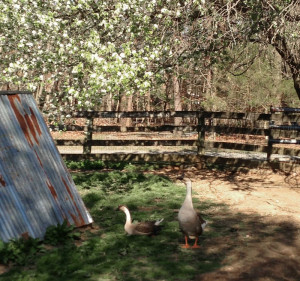 Sebastopol Geese are best known for their long curling, draped feathers. They are a medium sized goose with males and females weighing between 12-14 lbs. Thought to originate from an area around the Black Sea, they are named for the city of Sebastopol in Russia.

Seebies are a docile and relatively calm goose that are attentive and, if handled correctly, not aggressive. They are flightless so extra protection from predators is a must, especially when the goose is sitting a nest. A goose will lay approximately 25-35 eggs a year, or more, if they are collected and incubated. Their breeding season in our mid-atlantic area is from February until mid-June though in a mild summer they may also lay a late summer/early fall brood. During breeding season the ganders will compete by wrestling each other in what looks like a Greco-Roman Knot with 2 or 3 ganders each grabbing another's wing where is connects to the body and tussling in a circle for a few minutes. This is ONE way to identify males in the flock!

Sebastopols come in the standard, pure white, as well blue, gray, and buff colors in Solid, Splash, and Saddleback patterns. Our Pure Sebastopols are white, gray splash, and blue splash, and may carry for saddleback as well. 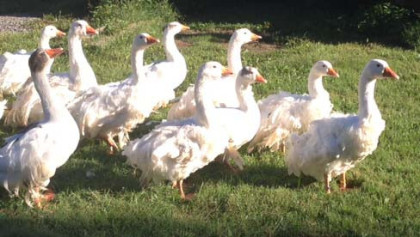 Young Sebastopols and Seebie Cross Geese (all crosses have been sold) 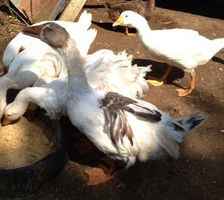 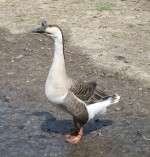 We also have a flock of Chinese geese. Chinese geese tend to be more protective and territorial than the Seebies. They will bite (pinch) and flog with their strong wings if they feel a threat is too close to their friends, mates, or nests. They will take on a predator much larger than themself so they make excellent flock watchdogs.

Though they can't really fly, Chinese geese are able to get a running start and get slightly off the ground for a few feet allowing them to move very quickly for their size. Males weigh about 15 lbs and the females about 12 lbs. Both sexes have large knobs on top of their bills with the males having a larger, more pronounced "bump" (see photo). The females (called geese) are prolific layers of white eggs and will lay Spring through mid Summer and again in the Fall.

The grey gosling in the photos below is a Chinese. 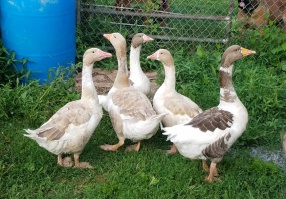 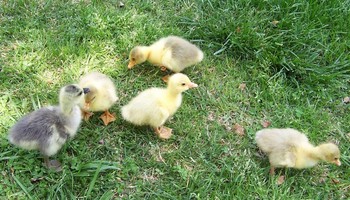 It is an interesting survival trait of waterfowl that when the babies hatch they will "imprint" on the first thing they see that is larger than themself, bonding to it in a primal connection as "MOM". One website humerously explained imprinting as:

Gosling + imprinted on goose + raised with geese = KNOWS it's a goose

All of our goslings are incubator hatched and imprinted on humans. This makes them much better pets and less likely to become aggressive. Because of this imprinting these goslings are almost dog-like in their desire to be with humans. So, when you take your goslings home, be prepared to spend a little extra time with them as they settle in. They will look to you for guidance and reassurance. An imprinted gosling will accept other goslings (especially if raised with siblings) but always think of themself as really being human and their "people" as being their flock leaders.