Peafowl come in many COLORS and each Color comes in several PATTERNS.

Blue (the naturally occuring color of Parvo Cristatus)
and the following mutations of Blue....
Cameo

Green ~ Green Peafowl are actually a totally different species (Parvo Muticus) than Blue and its mutations BUT it can cross with Blue producing a Spalding, which is a fertile hybrid. There are 3 known sub-species of green peafowl: Javanese (muticus muticus), Indo-Chinese (muticus imperator), and Burmese (muticis spicifer).

Silver Pied - a Pied pattern with over 80% white

White Eye - some to all of the eyes in the peacock's trane are white rather then colored, harder to identify in hens, can be identified in chicks by white tipped back feathers IF you are looking for it but it is very subtle.

White - I consider White a Pattern, see note above - white totally covers  the genetic color and any other pattern of the bird so a White Pea can carry the genes of another color hidden by the white. A bird can genetically be a Black Shoulder Purple but if it carries 2 white genes it will BE totally white even though it still carries and can pass on the other genes.

A single bird can have (genetically or visible) more than one pattern, for example a White Eye Silver Pied Purple.

The term "Split to" refers to the bird carrying a single recessive gene. The trait the bird is Split to will not be visible since a recessive gene requires 2 copies to be a visible trait. However, knowing that the bird is split tells you that it can produce whatever it is Split to if bred to another bird that carries 1 or 2 of that gene. For example: Black Shoulder Blue (split to Opal) looks just like a Black Shoulder Blue, but if bred to an Opal you can produce approximately 50% Opal offspring and if bred to another BS Blue (split to Opal) you can expect approximately 25% Opal off spring and 50% Split to Opal.

Enough of the confusing stuff.....

A peacock begins growing his trane (his long "tail" feathers) at 18 mos-2 years old but will not have a full trane until usually his 4th year. Each year after that he will have more "eyes" in his trane and it will get fuller and longer.

A peahen will not lay eggs until her second year. Peahens normally lay on the ground in a shallow depression. This makes them an easy target for predators when they begin sitting on the eggs, so care MUST be taken to safely pen up peas during breeding season (from the start of warm weather in the late winter/early spring until hot/dry weather around mid-July in our area). Every year we get calls from people looking for hens to replace ones they have lost. Adult hens are expensive and hard to find so PROTECT the ones you have!

Peachicks hatch after a 28 day gestation and hatch with a few flight feathers. This means they are able to fly a bit straight out of the egg. So no worries if your hen decides to set her nest up off the ground!

We currently have 3 Peafowl pens:

The PURPLE pen contains a Wild-Type Purple Peacock (Split to BS) in with Wild-Type, BlackShoulder, Pied, and Silver Pied Purple hens. This pen produces chicks of the same types as the parents.

The WHITE/PIED pen contains a Silver Pied Blue peacock in with White, Blue Pied, and Blue Silver Pied hens.This pen produces chicks of the same types as the parents.

We sell peachicks and peafowl hatching eggs when they are available.

Eggs are $10 each plus Priority Mail shipping and a $2.50 handling charge to cover the amount of bubble wrap and packing peanuts we use.

Chick prices start at $35 and go up from there depending on color, age, and sex.﻿ 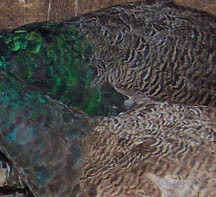