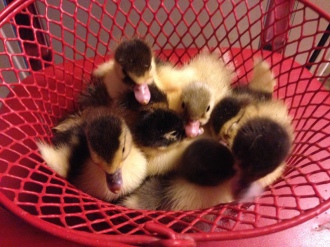 Many people keep ducks as pets or pond ornaments but in many cultures ducks are valued as layers of the preferred eating eggs and as meat birds. Our  Muscovy flocks tend to be somewhat seasonal in their laying, but are heavy layers and great at hatching and raising their ducklings . 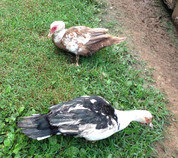 Muscovy are a quiet, quack-less duck that makes a chirping sound and love to talk to each other and to you! They are a very calm and friendly duck that likes to interact with people. Muscovy are also a perching duck and can fly up onto objects when they choose to do so.

Muscovy hens are medium sized (7 lbs) and the drakes are huge at about 15 lbs. Both sexes have a nude face with red around the base of the bill and the drake has pronounced red bumbs or caruncles from the base of the bill up onto theface and a low erectile crest of feathers that he will display when threatened or as a display to other males. They are a perching duck and can fly up onto objects; for this purpose they have large, wide feet with sharp,pronounced claws.

While the natural color of Muscovy in the wild is black with white wing patches, domestic Muscovy come in a wide range of colors both in solid and pied patterns. We have Black Pied, Chocolate Pied, Chocolate, Blue Pied, Blue Fawn, Lavender Pied,and blue-eyed White in our flock and have produced all these same colors with Chocolate Pied being the predominant color in our ducklings.

Muscovy are excellent layers, great setters, and wonderful "parents" and are very capable of raising their own ducklings. We do hand raise all of our waterfowl so it is friendlier to and less shy of  humans. 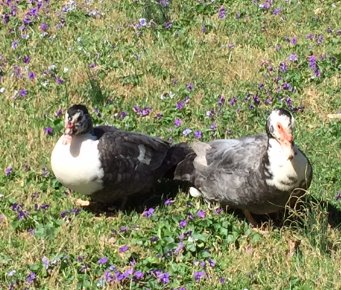